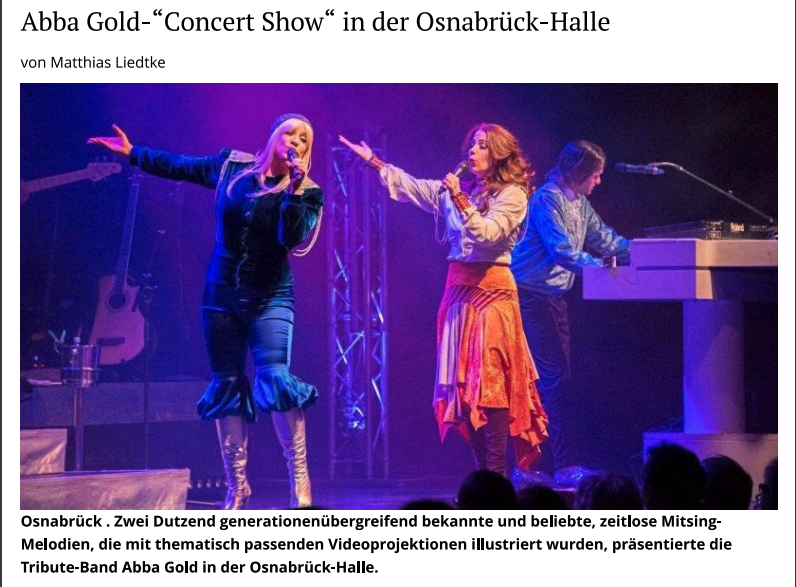 Osnabrück . The tribute band Abba Gold presented two dozen timeless melodies, known and loved by all generations, which were illustrated with thematically matching video projections in the Osnabrück Hall.

Not only the choreographies and changing outfits of the seventies were astonishingly true to style, but also the music. As Benny, Adam Fletcher played a clunky white vintage keyboard, whose tinny beats and rattling samples actually sounded old-fashioned. Already from the second acoustic Swedish snack the colourful mixed fan crowd of the second most successful band in the world after the Beatles fell into a permanent gossip mode, to which party evergreens like “Mamma Mia”, “Gimme Gimme Gimme” or “Dancing Queen” should also be joined by exuberant dances.

The atmospheric highlight, however, was the sad divorce anthem “The Winner Takes It All”, intoned by Debbie Watt as Agnetha, for which her ex-husband Björn, played by Sebastian Gurgel, exchanged his star-shaped electric guitar for an acoustic one. Amplified with a drummer and a bass player, the B-men created a retro sound that perfectly staged the vocal harmonies of the two A-women. A successful time travel and appreciation.

Harmonious: (from left) Debbie Watt as Agnetha, Kate Bassett as Anni-Frid and Adam Fletcher as Benny at the Abba Gold Concert Show in the Osnabrück Hall. Photo: Egmont Seiler