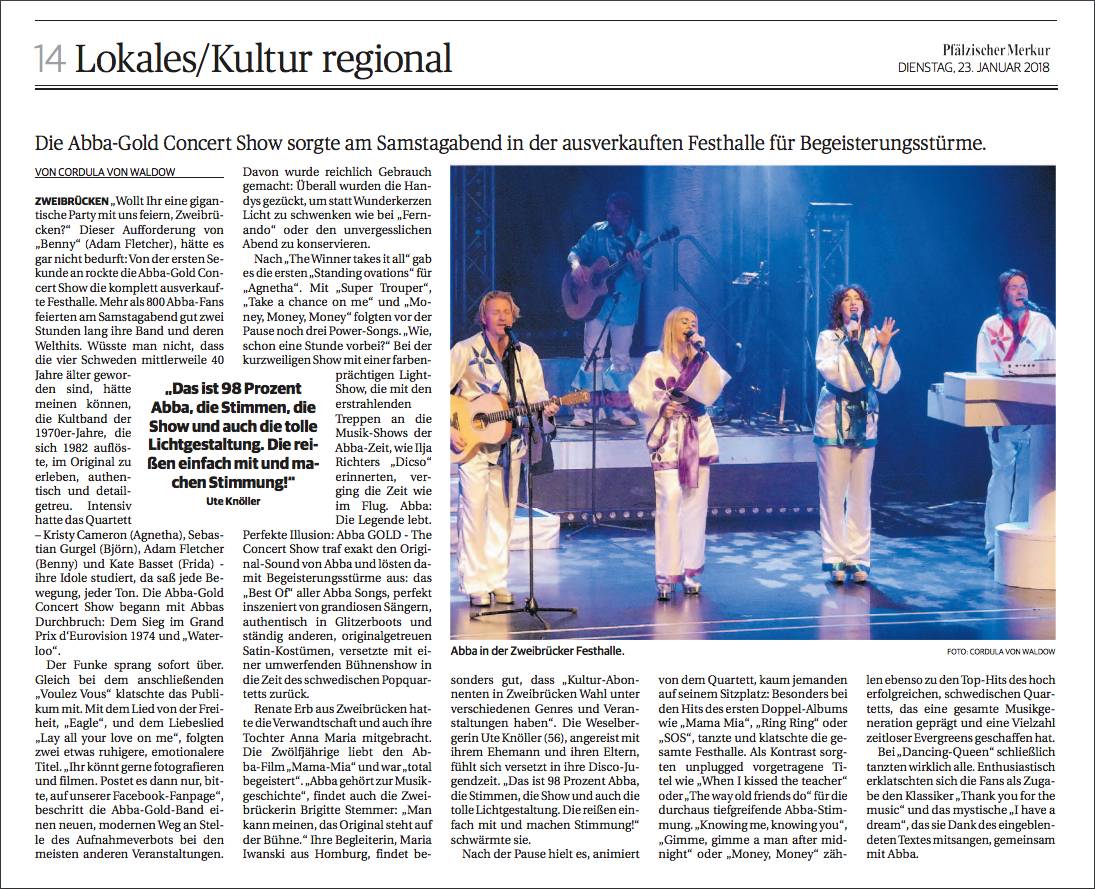 The Abba-Gold Concert Show on Saturday evening in the sold-out Festhalle caused a storm of enthusiasm.

“Do you want to have a gigantic party with us, Zweibrücken?” This request of “Benny” (Adam Fletcher), it would not have been necessary at all: From the first second on the Abba-Gold Concert Show rocked the completely sold out Festhalle. More than 800 Abba fans celebrated their band and their world hits for more than two hours on Saturday evening. If you didn’t know that the four Swedes have grown 40 years older in the meantime, you might have thought that the cult band of the 1970s, which disbanded in 1982, could have been experienced in the original, authentically and true to detail. The quartet – Kristy Cameron (Agnetha), Sebastian Gurgel (Björn), Adam Fletcher (Benny) and Kate Basset (Frida) – had studied their idols intensively, there was every movement, every note. The Abba-Gold Concert Show started with Abbas breakthrough: the victory in the Grand Prix d’Eurovision 1974 and “Waterloo”. The spark jumped immediately. Right at the following “Voulez Vous” the audience clapped along. With the song of freedom, “Eagle”, and the love song “Lay all your love on me”, two somewhat calmer, more emotional titles followed. “You’re welcome to photograph and film. Just post it, please, on our Facebook fan page”, and the Abba Gold Band took a new, modern approach instead of the recording ban at most other events.

This was widely used: everywhere the mobile phones were pulled out in order to swivel light instead of sparklers as with “Fernando” or to preserve the unforgettable evening. After “The Winner takes it all” there were the first “Standing ovations” for “Agnetha”. With “Super Trouper”, “Take a chance on me” and “Money, Money, Money” three power songs followed before the break. “What do you mean, an hour gone?” During the entertaining show with a colourful LightShow, which reminded of the music shows of the Abba period with the shining stairs, as Ilja Richter’s “Dicso” reminded us, time flew by. Abba: The legend lives. Perfect illusion: Abba GOLD – The Concert Show hit exactly the original sound of Abba and caused a storm of enthusiasm: the “Best Of” of all Abba songs, perfectly staged by grandiose singers, authentic in glitter boots and constantly different, faithful satin costumes, brought back to the time of the Swedish pop quartet with a stunning stage show. Renate Erb from Zweibrücken had brought her relatives and her daughter Anna Maria with her. The twelve-year-old loves the Abba movie “Mama-Mia” and was “totally thrilled”. “Abba is part of the history of music,” says Brigitte Stemmer from Zweibrück: “You could think that the original is on stage.” Her companion, Maria Iwanski from Homburg, finds it is particularly good that “Culture subscribers in Zweibrücken have a choice among various genres and events”. Ute Knöller (56) from Weselberg, who arrived with her husband and parents, feels transported back to her disco youth. “That’s 98 percent Abba, the voices, the show and also the great lighting design. They simply carry you away and create a mood,” she enthused. After the break it stopped, animated

Especially during the hits of the first double album like “Mama Mia”, “Ring Ring” or “SOS”, the whole festival hall danced and clapped. As a contrast unplugged songs like “When I kissed the teacher” or “The way old friends do” provided the deep Abba mood. “Knowing me, knowing you”, “Gimme, gimme a man after midnight” or “Money, Money” are also among the top hits of the highly successful Swedish quartet, which has shaped an entire music generation and created a multitude of timeless evergreens.

Dancing-Queen, everybody was dancing. Enthusiastically the fans clapped their hands as encores to the classic “Thank you for the music” and the mystic “I have a dream” that they sang thanks to the inserted lyrics, together with Abba.

Abba in the Zweibrücker Festhalle.  PHOTO: CORDULA BY WALDOW

“That’s 98 percent Abba, the voices, the show and also the great lighting design. They’re just gonna get you going and get you in the mood!” Ute Knöller