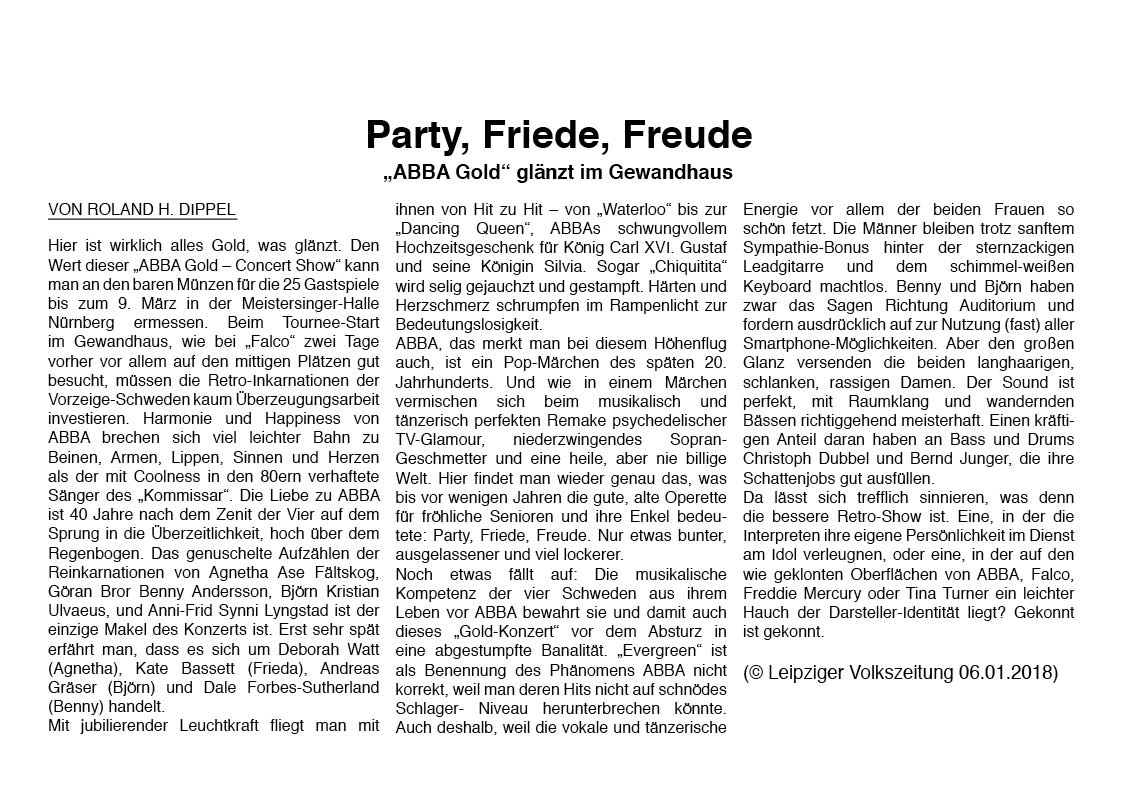 “ABBA Gold” shines in the Gewandhaus

Everything that glitters is really gold here. The value of this “ABBA Gold – Concert Show” can be measured by the cash coins for the 25 guest performances until 9 March in the Meistersinger Hall in Nuremberg. At the start of the tour in the Gewandhaus, as with “Falco” two days before, the retro incarnations of the showpiece Swedes hardly have to invest much persuasion work, especially in the central seats. ABBA’s harmony and happiness break their way much more easily to legs, arms, lips, senses and hearts than the singer of the “Kommissar” who was arrested with coolness in the 80s. The love for ABBA is 40 years after the zenith of the four on the leap into the supernatural, high above the rainbow. The mumbled enumeration of the reincarnations of Agnetha Ase Fältskog, Göran Bror Benny Andersson, Björn Kristian Ulvaeus, and Anni-Frid Synni Lyngstad is the only flaw of the concert. Only very late you learn that they are Deborah Watt (Agnetha), Kate Bassett (Frieda), Andreas Gräser (Björn) and Dale Forbes-Sutherland (Benny). With jubilant luminosity you fly with them from hit to hit – from “Waterloo” to “Dancing Queen”, ABBA’s swinging wedding present for King Carl XVI Gustaf and his Queen Silvia. Even “Chiquitita” is blissfully cheered and stamped. Toughness and heartache shrink to insignificance in the limelight. ABBA is a pop fairy tale of the late 20th century, as you can see with this flight of fancy. And like in a fairy tale, psychedelic TV glamour, soprano smashes and a perfect, but never cheap world mix up in the musically and dancingly perfect remake. Here you can find exactly what until a few years ago the good old operetta meant to happy seniors and their grandchildren: party, peace, joy. Just a little more colorful, more frolicsome and a lot looser. Something else stands out: The musical competence of the four Swedes from their life before ABBA saves them and thus also this “Gold Concert” from falling into a truncated banality. “Evergreen” is not correct as the name of the phenomenon ABBA, because one could not break down their hits to the level of a sordid pop song. Also because the vocal and dancing energy of the two women is so beautiful. Despite a gentle sympathy bonus, the men remain powerless behind the star-pointed lead guitar and the mold-white keyboard. Benny and Björn are in charge of the auditorium and expressly call for the use of (almost) all smartphone possibilities. But the two long-haired, slender, racy ladies send out the great shine. The sound is perfect, with surround sound and wandering bass really masterful. Christoph Dubbel and Bernd Junger, who fill their shadow jobs well, play a big part on bass and drums. There you can wonder what the better retro show is. One in which the performers deny their own personality in the service of the idol, or one in which the cloned surfaces of ABBA, Falco, Freddie Mercury or Tina Turner have a slight touch of performer identity?  You do a good job.